‘Together Against Hate’ highlights the shocking abuse of UK staff.

‘Together Against Hate’, created and produced by the Outfit in partnership with Channel 4 for Nationwide, Network Rail and Co-op, has launched.

The brands have come together to highlight the shocking abuse and violence carried out against customer-facing staff in the UK.

Taking over an entire ad break during Channel 4’s Gogglebox, the thought-provoking work features real audio recordings and CCTV footage of the verbal and physical abuse experienced by each company’s employees and delivers the important message that violence and threatening behaviour is never OK.

The work illustrates some of the 400 plus abuse incidents that UK customer-facing staff experience every single day that are perpetrated by a small minority of people.

Throughout the break, employees from each brand warmly reflect on why they love working with the general public. However, in the first spot, this is starkly overlaid with recordings of severe verbal abuse aimed at Nationwide Building Society’s call centre staff. Newspaper headlines demonstrating the scale of physical and verbal abuse experienced by Co-op’s retail employees are shown in the second commercial. Whilst in Network Rail’s advertisement, actual examples of harsh verbal abuse and CCTV footage of physical abuse suffered by their staff are shown – all drawing attention to the impact this has on the real people simply carrying out their jobs.

In between each brand’s ad, statistics demonstrate to viewers the concerning extent of this issue before they are encouraged to ‘work together to build a more tolerant and mutually respectful society for everyone’.

Niall Murdoch, co-founder of the Outfit, said: ‘The real employees featured in the campaign bravely gave us an insight into the terrible things they can face on a daily basis, but they also told how much they love their jobs and their customers. We’re honoured to be able to tell their stories in the hope that highlighting this unacceptable abuse might go some way to changing things for the better.’

Sara Bennison, Chief Product and Marketing Officer, Nationwide Building Society, said: ‘Mutual respect is a core value for us at Nationwide. We believe society thrives when we are all more accepting and respectful of one another. In 2018 we could no longer be bystanders watching the growing hate directed towards the real people in our TV adverts – we took a stand against the abuse then and we’re taking a stand again today’.

Jo Whitfield, CEO, Co-op Food, said: ‘Violence and abuse against shop workers have reached intolerable levels and we are pleased to be taking a stand alongside our colleagues in the travel and financial services sectors to say enough is enough, as we urgently need a reset in society to help protect people who are simply going to work.’

Suzy McGill, Head of Marketing and Brand at Network Rail, said: ‘We were so pleased to be approached with this idea. Not only was it highly creative but it is also about an issue that’s incredibly important to us. We sincerely hope that the public get behind #TogetherAgainstHate and make this type of behaviour a thing of the past.’

Matthew Salmon, Interim Sales Director, Channel 4, said: “Partnering with the Together Against Hate campaign is an opportunity for Channel 4 to do what we do best – using the power of TV to encourage debate and inspire positive societal change.’

The campaign builds on 2018’s multi award-winning #TogetherAgainstHate collaboration, also created and produced by the Outfit, which took a stand against online abuse and encouraged viewers to consider the impact of divisive and hateful comments online. 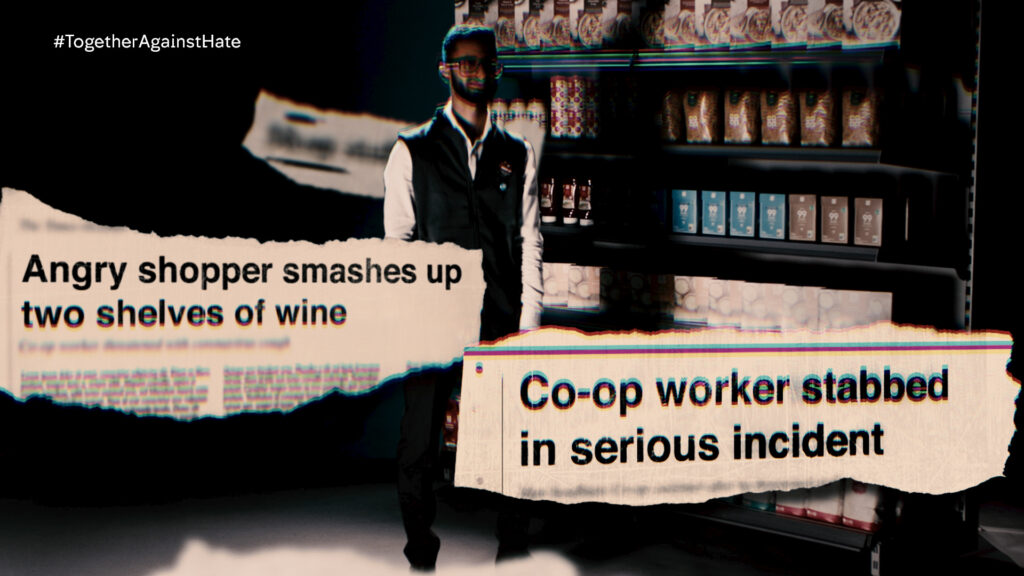